Hailstorms can approach suddenly and can do a great deal of damage to one's property. Anyone who has ever been caught in one knows how terrifying a hailstorm can be, especially if the hailstones are substantial in size.

Hailstorms cause an estimated $1 billion in property damage every year in the United States, according to the National Oceanic and Atmospheric Administration (NOAA), leaving many to consider filing car insurance and homeowners insurance claims.

Hailstorms can happen anywhere in the country, but some states receive a higher share of them than others. For the year 2014, Weather.com listed the following as the top 10 states with hail damage claims:

Texas is a perennial leader in hail damage claims. In looking at car insurance claims filed back to 2000, Texas represents 20 percent of all hail claim losses. The biggest losses come in areas that are prone to having large storms in areas that are also densely populated. Texas has quite a few major cities and is home to more than 28 million people—and it has a lot of severe storms. 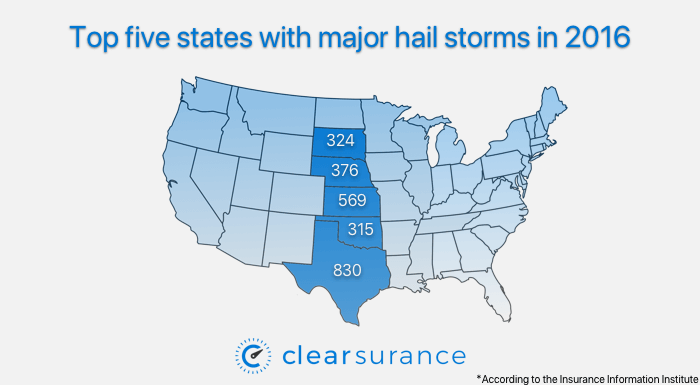 Hailstorms more frequently damage cars and homes, but depending on the severity of the storm—and the size of the hailstones—homes, and particularly roofs, can sustain expensive damage. Cars experience damage from hailstones as well. An acorn-sized hailstone that hits a car can leave a sizeable dent that wouldn’t make a mark on an asphalt shingle, for instance.

An assessment of hail insurance losses detailed on III.org notes that a report done by Verisk Insurance Solutions found that both the number of claims and the average severity (cost) of claims increased during the study period, covering 2000 to 2013. During that period, $54 billion was paid out in claims, with 70 percent of the losses occurring in the last six years of the study. 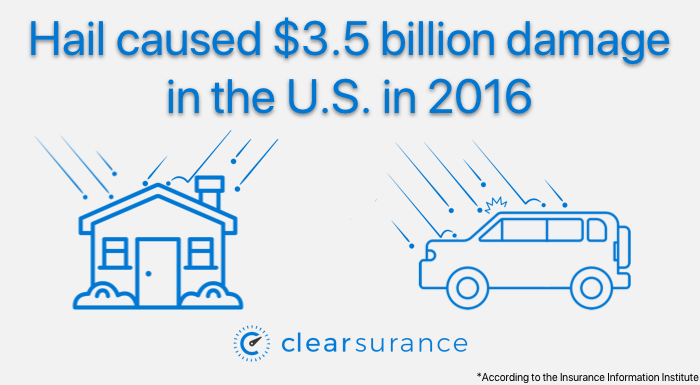 Ways to protect your property from hail damage

Many of the tips associated with making sure your house is protected are similar to the tips suggested for any storm. This includes making sure any tree limbs that could damage the house or roof are kept trimmed. Also, make sure to track the health of any trees that grow near your house, as sick or dying trees are more likely to fall, especially in a rough storm.

If you have a garage, that is the best place for your vehicle in a hailstorm. Other large or easily damaged items, like a glass-topped table that is part of deck or patio furniture, should be moved to a sheltered area if possible when a storm is approaching.

If you do have hail damage...

If you were caught in a hailstorm and your car was damaged, check your auto insurance policy. Generally speaking, if you have comprehensive coverage on your vehicle, it will most likely be covered for the cost of any repairs, after your deductible.

If your home was damaged by hail, call your agent or insurance company. If you have the ability to do so, once it is safe, take a picture of the hailstones that fell, preferably next to an item that can indicate the size of hailstones, such as a quarter. This helps to determine the size of the hailstones that caused the damage. Also, take pictures of any damage to siding or roof shingles.

It’s impossible to protect your property completely from the elements, but if a hailstorm does damage your home or car, having the right insurance policy in place can get you on the road to repairs quickly. To learn more about what others have shared about their carriers, check out insurance reviews at Clearsurance.com.

About The Author: Jen Phillips

Jen Phillips is a freelance writer at Clearsurance. Her writing interests include FAQs and providing helpful information about commonly searched insurance topics.