No area in the country, or arguably the world, has a stretch of coastline as expensive and hurricane-prone as Florida. While its array of beaches make it a premier place to live and visit, Florida’s susceptibility to hurricanes puts policyholders and insurers in a risky situation.

With the state surrounded by the warm waters of the Atlantic Ocean, Florida is a hotbed for hurricanes. Not to mention, more than 15 million Florida residents live in coastal counties — the state boasts an expansive 1,350 miles of coastline.

Of all U.S. hurricanes, a staggering 40 percent hit Florida, according to the National Oceanic and Atmospheric Administration. Since the organization began tracking data in 1851, 117 hurricanes have struck Florida — nearly double that of Texas’ 64.

Last year, Hurricane Irma caused $23 billion in insured losses, not including flood damage, resulting in extensive damage to Florida’s homes. The storm caused 70 percent more Florida homeowners, from the previous nine months compared to the nine months after Irma, to leave or shop their insurance, based on Clearsurance data.

Now, as Floridians prepare for this year’s hurricane season, homeowners are left wondering if they’ve adequately protected their home and personal property with an insurer that will stand by them in the event of a catastrophic storm.

The Florida market is dominated by companies that do nearly all of their business within the state, more so than any other state. What we’ve discovered at Clearsurance, as we’ve collected more than 105,000 reviews nationally from consumers, is that many Florida homeowners haven’t had favorable experiences with these Florida-focused insurers.

In fact, of all of the states across the country, Florida has the least happy homeowners policyholders based on the review data on Clearsurance. Florida users who have submitted a review of their homeowners insurance company have provided an average overall score of 4.03 compared to a nationwide homeowners average of 4.27. Perhaps even more telling, Florida-focused insurers received an average score of only 3.57.

Florida’s homeowners market is different than any other in the U.S.

While most states across the country are dominated by the household brands we’ve come to know from commercials and billboards, you’ve likely only heard of two of the top 15 writers of home insurance in Florida.

In the graphics below, you can see that a majority of the largest homeowner writers in Florida are focused solely within the state, rather than a national brand such as State Farm, Allstate or Farmers Insurance Group. 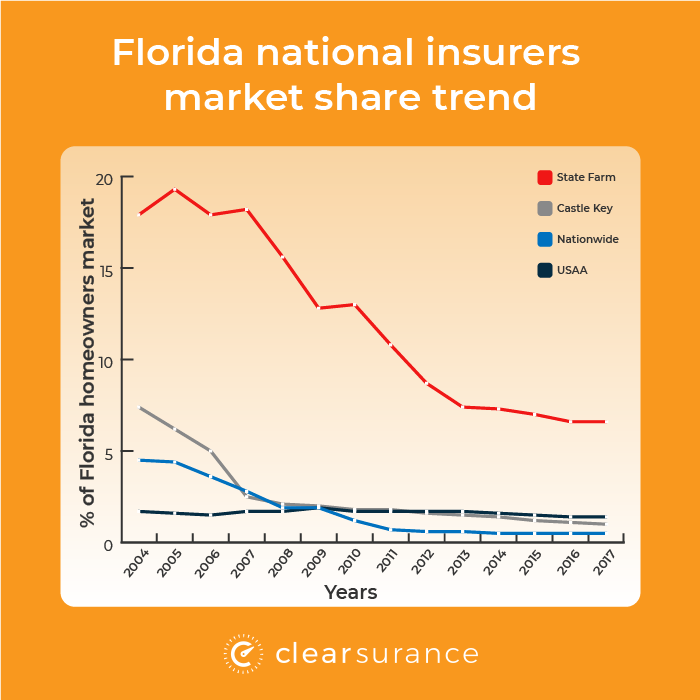 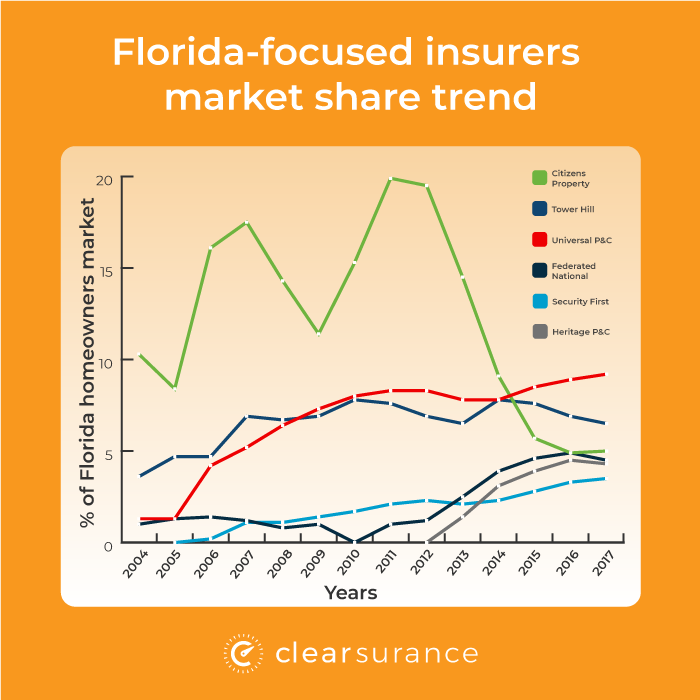 The unique Florida market, to some degree, can be tied back to some of the worst hurricanes that have struck Florida. Hurricane Andrew in 1992 and the five total Category 3 hurricanes in 2004 and 2005 wiped some insurers completely off the map and caused other national insurers, like State Farm and Allstate, to significantly decrease the amount of business they wrote in Florida.

Past hurricanes’ devastating impact on the Florida market

Before Irma last year, Hurricane Andrew was the most destructive hurricane to hit Florida in history, as it caused more than $25 billion in damage, destroyed more than 25,000 homes and damaged more than 100,000 others. Most of this damage came in Dade County, now known as Miami-Dade County.

The extensive losses were too much for many insurers in the state, with eight companies going insolvent — seven Florida-focused insurers and one national carrier — leaving nearly a million Florida policyholders without coverage.

The market shift started in 1992, but companies like State Farm and Allstate then began to question whether insuring Florida homeowners was worth the risk after the series of hurricanes in 2004 and 2005. In fact, State Farm planned to abandon the market completely in 2009. Instead, the company negotiated an agreement with Florida regulators to issue a 14.8 percent rate increase to its policyholders and cancel 15 percent of its policies. 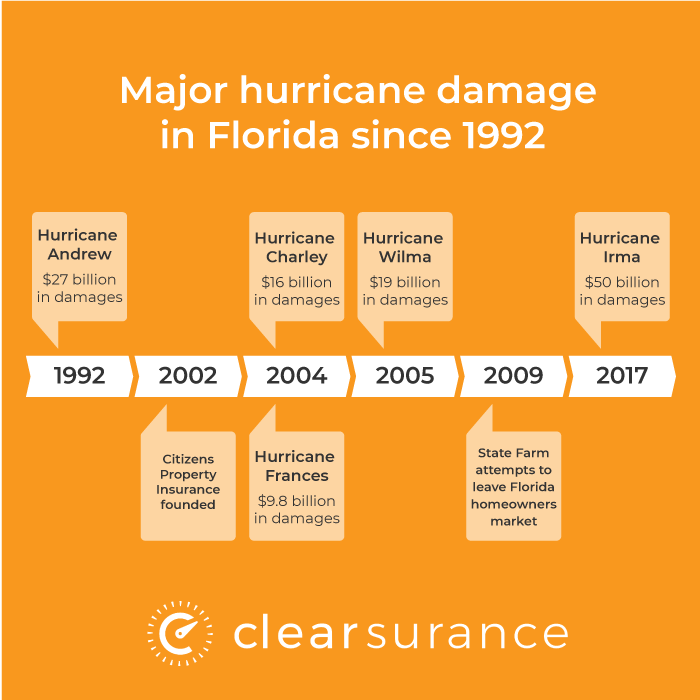 Citizens Property Insurance, a state-run insurer that was created to offer insurance to those who couldn’t find property insurance coverage in the private market, quickly accrued policyholders after it was founded in 2002. A year after the 2004 and 2005 hurricanes, Citizens had a 16 percent market share in Florida.

While Citizens doesn’t insure nearly the same percentage of Florida homeowners now — in 2017 it ranked fourth in the state with a 5 percent market share — Florida taxpayers would still feel the effects of a catastrophic hurricane. If Citizens’ surplus is diminished after a storm, “Florida law requires Citizens to levy assessments on most Florida property-casualty insurance policyholders until any deficit is eliminated,” according to the insurer’s website. Essentially, Citizens would issue “hurricane taxes” in addition to premiums to cover the shortfall.

And even though Citizens’ overall market share has dropped in recent years, the insurer is still responsible for insuring some of the riskiest areas in the state. In Monroe County where the Florida Keys are located, for example, Citizens accounts for 28 percent of the market share. It’s similar in Miami-Dade County, where it holds 16 percent of the market as of 2017.

Florida homeowners are less happy than policyholders in any other state

Florida isn’t the only state around the country prone to expensive claims from weather-related damage. Texas was rocked by Hurricane Harvey in 2017 and continually experiences the most hail-related claims. Other Midwestern states have to be fearful of tornadoes. And in California, wildfires seem to threaten homes by the day.

So even though Florida is the most at-risk for hurricane-related damage, it would be unfair to simply point to that as the reason Florida homeowners are less happy than homeowners policyholders from any other state. But something is going on in Florida.

The data shows that Florida policyholders are significantly less happy with their homeowners insurance companies compared to any other state. The average homeowners’ score among Florida users is 4.03, according to Clearsurance users. By comparison, Colorado, the second-least happy state, has an average score of 4.13. And to put that in context, the 10th happiest state has an average score of 4.31.

But as we dig deeper into what’s going on with Florida policyholders, we see the numbers are even worse when we break it down by company. If we just look at the average Clearsurance score for Florida-focused companies, users have provided an average rating of 3.57.

So now that we know the history of the Florida market and the context of just how unhappy policyholders are in the state, it begs the question: why are policyholders of these Florida-focused companies rating their insurers so much worse than policyholders of other companies?

Why are policyholders of Florida-focused companies less happy?

It would be nice to be able to pinpoint one cause, or even to name a few causes as to why Florida-focused consumers have an average rating of 3.57 from Clearsurance users. But just like insurance itself, it’s not quite that simple.

There are so many aspects of an insurance company that can sway how a policyholder feels. From price to customer service to claims experiences, there’s no shortage of potential factors.

When we consider how many Florida-focused reviews talk about a hurricane and/or a claims dispute compared to Florida nationals, it aligns with the number of lawsuits against the largest Florida insurers after Hurricane Irma.

Another potential factor contributing to the low scores for Florida homeowners companies is the rate increases insurers impose on policyholders to help combat the risk in the state. Over the past year, People’s Trust issued a 16 percent rate hike, Citizens a 6.7 percent increase, Castle Key (an Allstate company) a 10 percent hike and State Farm a 9.5 percent increase. The rates are expected to climb — you can see what the price is expected to be by county over the next five years based on the averages of the 15 largest insurers from the Florida Office of Insurance Regulation.

But, at least to some degree, our data shows that some of these lower scores for insurance companies may be attributed to misunderstandings between the insurance company and the policyholder over what is covered. Nearly 7 percent of Florida-focused insurer reviews talked about a miscommunication compared to 2 percent of Florida national reviews. In this regard, consumers and insurers seem to both have a role to play in making sure coverage is understood before the policy is purchased.

In natural disaster research Clearsurance conducted after the 2017 hurricanes, we found that 42 percent of survey participants, which came from all parts of the country, hadn’t taken steps to check their coverage. This was despite the fact that nearly 90 percent of participants expressed concern that a natural disaster could hit their home.

This is why Clearsurance is a valuable resource for insurance consumers. Not only can insurance shoppers see ratings and reviews of insurance companies, but our blog has educational content designed to help consumers make smarter insurance decisions.

The Florida homeowners market is unlike that of any other state and the state’s vulnerability to high winds and flooding makes securing proper coverage from a reliable company a must for Florida residents. The more Florida policyholders who write a review on Clearsurance of their experiences, positive or negative, with their insurance company, the more other residents can learn and better protect their financial wellbeing.