The Net Promoter Score® has long been viewed in the insurance industry as a reliable measure of policyholder loyalty. The appeal is the simple nature of the question...one question asking consumers their likelihood of recommending a specific brand. The method for administering the NPS is left up to the individual companies.

Since companies self-administer, and in essence survey themselves, the application of NPS methodology can be somewhat opaque and inconsistent across the insurance industry.

Clearsurance has collected over 125,000 insurance carrier reviews since 2017 by asking the NPS question in the same exact way at truly random touchpoints in the insurance customer journey. Each policyholder leaving a review is asked the NPS question of how likely they are to recommend their insurer. There is no selection process. Simply said everyone is asked and required to publish a review and rating. Our consistent method allows for a more reliable and unbiased representation of consumer sentiment.

Below, you'll find comparable Net Promoter Scores for auto and homeowners insurance companies. Additionally, we are providing insights into the key drivers of the scores based on ratings and the 100,000+ comments, where we have mined the unstructured text data that policyholders have provided.

What is a Net Promoter Score and what's a good NPS Score?

Respondents to the Net Promoter Score questioned are grouped into one of three categories, depending on their response.

Only car and home insurers with at least 150 customer reviews were included in our ranking list, resulting in a ranking of 35 car and 18 homeowners insurance companies.

Several factors can influence a company’s score. While it’s not the focus of this report to determine the driving factor for each company, we did look at the results in aggregate in order to uncover a few insights.

1. Having a claim itself is not a strong indicator; it’s how the claim service is rated that matters

Comparing NPS for those who experienced a claim vs. those who did not resulted in only a slight difference. Contrary to what one might think, those who had a claim actually averaged a higher NPS. This is likely due to the fact most individuals have a positive claim experience. In fact, the more glaring impact can be seen when comparing NPS by how individuals rated their claims experience. Analyzing the over 26,000 ratings for claims experience showed a significant trend. As the rating for claim service improves, so does the NPS. 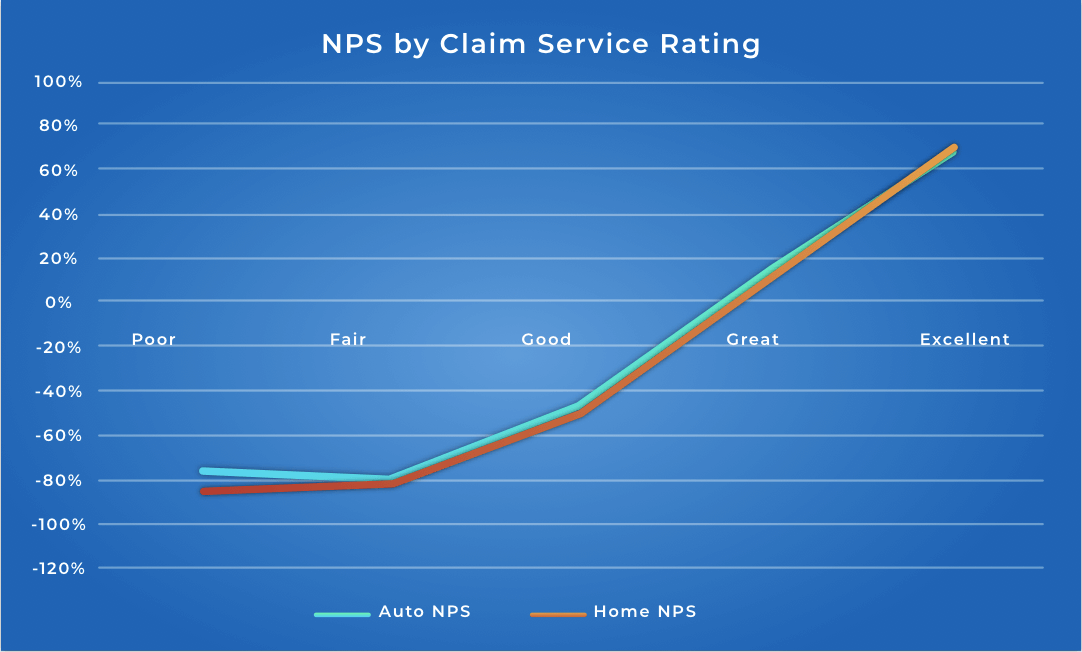 Clearsurance was able to access nearly 50,000 reviews where a policyholder provided detailed information about the length of time they have owned a policy with their carrier. According to the data, the risk of a policy lapsing will vary based on years of policy duration.

3. Multiple factors influence a score; however poor claim service has the biggest impact on NPS

Net Promoter Score is calculated by segmenting individuals into either promoters or detractors. In looking at the unstructured text data, comments provided by these two segments provides an understanding of how their experiences differ, and what might be driving feedback. As detailed in the table below, promoters are significantly more likely to use positive words to describe their experience (i.e. speed, helpful and ease). It’s important to note that the frequency of mentions for rate increase saw the greatest deviation; however, it’s the reviewers referencing a “poor” claims experience that had the most significant and predictable impact relative to the NPS...which gets us back to our first insight above.

Interested in engaging more with Clearsurance? Learn more about our offerings here.

About The Author: Marcy Updike

Marcy Updike is a researcher and consumer insights professional in the insurance industry. Her area of interest includes data-focused pieces. Marcy was formerly the VP of Consumer Insights and Analytics at Clearsurance.