In late 2018, a social media dust-up between renters and homeowners insurance technology upstart Lemonade Insurance, and old-line insurance industry stalwart State Farm motivated us to look at what their respective customers are saying about their experiences with the companies.

A little context: State Farm recently aired a television commercial poking fun of new technology focused insurance entrants to the marketplace. Specifically, the commercial made fun of the use of bots (artificial intelligence) used to process claims.

Lemonade was quick to respond to the perceived slight with early Lemonade investor Ashton Kutcher even weighing in on Twitter. Kutcher has since deleted his tweet, but Coverager captured it in a screenshot. 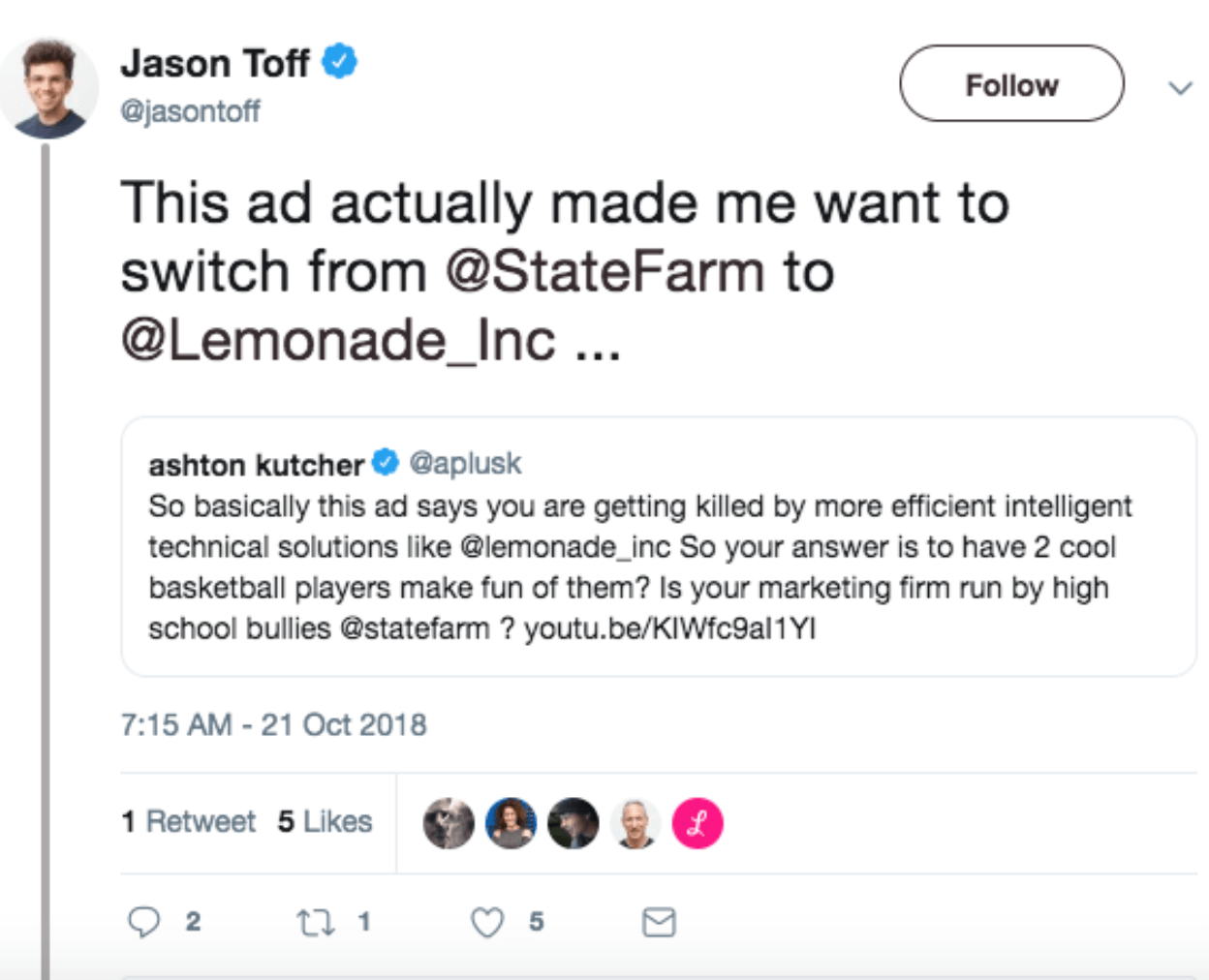 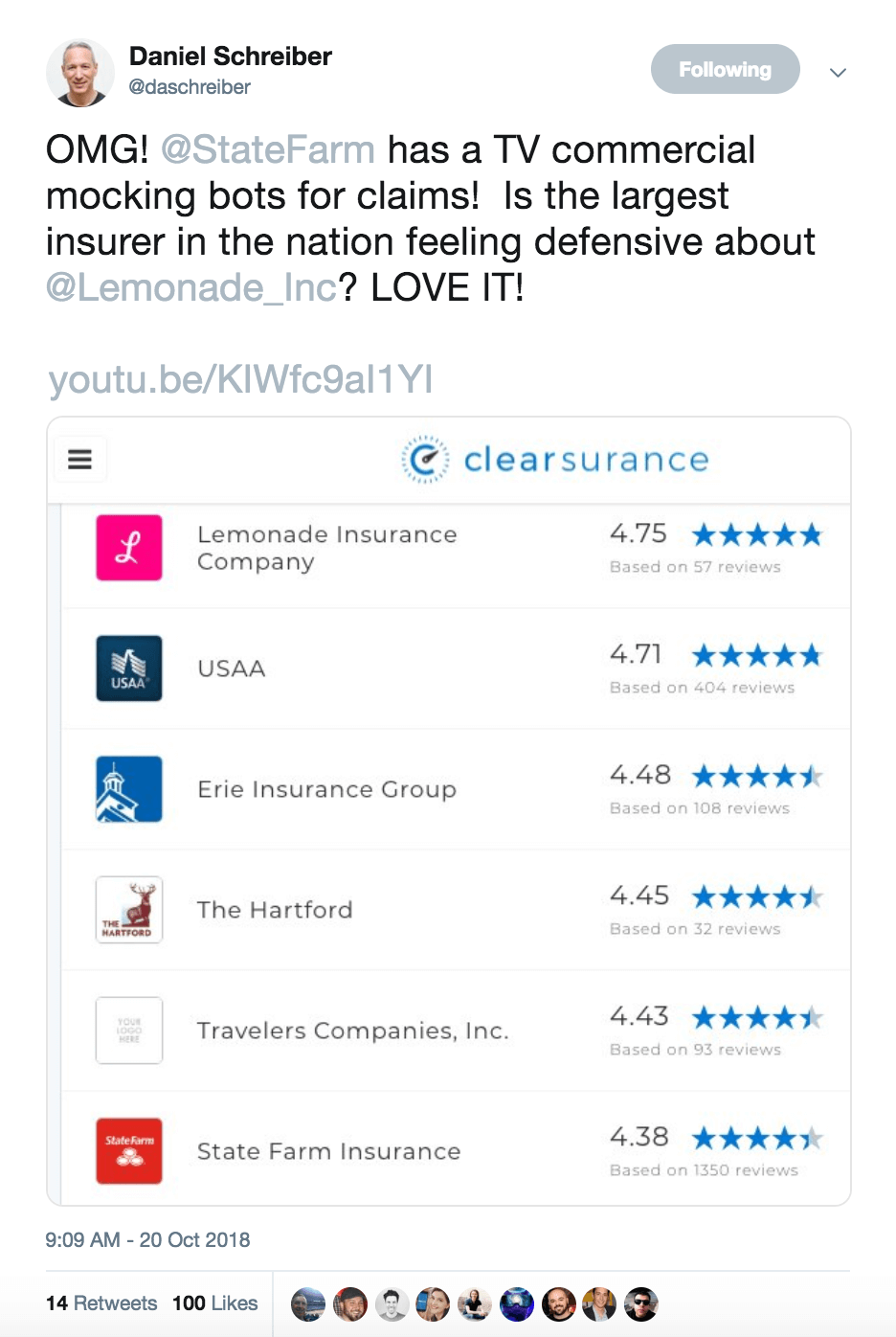 Full disclosure: Lemonade is an engaged subscriber and affiliate marketing partner of Clearsurance. State Farm is not currently a subscriber. Being a subscriber does not enable any company to manipulate their customer ratings, which derive 100 percent from customer feedback.

With that context, let’s see what renters insurance policyholders are saying about each company. Below is a table that includes renters insurance ratings of Lemonade and State Farm for six different categories. It’s important to note that given Lemonade was founded in 2015, and has a vastly smaller market share than State Farm, the startup insurer has far fewer renters insurance reviews (57) on Clearsurance than State Farm (1,349). Given that, the data should be taken with a grain of salt as Clearsurance user testing has revealed that the more reviews on a company, the more weight a customer assigns to that company’s rating

Time will ultimately tell whether Lemonade can maintain these high customer ratings as it scales and receives more reviews from its policyholders. Still, we can at the very least get a sense for how consumers feel about Lemonade’s technology-based insurance. And the early returns portend a customer base that is highly satisfied with the experience.

Despite not having agents like State Farm, which has more than 18,000, Lemonade has a 4.75 customer service rating out of 5. The part of the story that’s harder to tell with the data is how consumers’ experience has been at the time of a claim.

Lemonade’s 4.33 claim service score is based on just nine reviews, which isn’t enough to draw any conclusions from. By comparison, State Farm’s 4.26 claim service rating (based on 267 reviews that include a claim) and 4.41 customer service rating are both among the best for renters insurance companies.

The largest discrepancy between the two companies is price. Lemonade has received a 4.80 rating from consumers for price while State Farm’s 4.21 price rating is its lowest of any of the six categories we collect ratings on.

Beyond just the ratings, though, consumer feedback within reviews has helped provide us with a look at what their policyholders value.

Lemonade’s policyholders frequently discuss the ease of working with the company, things like getting a quote, buying a policy and setting up the coverage. In fact. 53 percent of Lemonade reviews discuss ease of the user experience while just 15 percent of State Farm reviews do so.

The online services of Lemonade are also a main focus of reviews. More than a third of Lemonade reviews (35 percent) discuss the companies’ online and application-services while just 3 percent of State Farm reviews address the insurer’s online services. Instead, State Farm reviews are more apt to talk about agents (18 percent compared to 0 percent for Lemonade, which has no agents).

All this isn’t to say consumers have indicated one method — agent or bot — is better than the other. Quite the contrary, in fact. The consumer ratings data shows that both methods are pleasing the companies’ respective policyholders.

State Farm and Lemonade appear to be geared toward different demographics and different service preferences. Some may prefer the personalized service an agent can provide. Others may prefer the ease and speed of a bot — like Lemonade’s Maya. That’s what this data indicates. And both companies appear to be enjoying success of their different business strategies.

Lemonade has raised $180 million in funding and just last week was one of the companies Forbes named in a list of the next billion dollar startups. State Farm, meanwhile, holds the largest P&C market share in the United States.

The misconception in all this — and why Lemonade may have taken offense to State Farm’s commercial — is that it insinuated agents are far superior to bots. The State Farm agent in the commercial says “these bots don’t have the compassion of a real State Farm agent.”

While more State Farm reviews use words describing the helpfulness of the company (15 percent to 7 percent for Lemonade), the customer service ratings in the table above indicate that isn’t the only part that matters. In today’s technological age, customer service in the eyes of the consumer may not just be about being compassionate. It factors in things like ease and speed, too. We would submit that saving a customer time from having to think about their insurance is an act of compassion.

What this means for Lemonade and State Farm in years to come remains to be seen. For now, a majority of the policyholders from these companies have indicated they’ve had a positive experience. If you’ve held a policy with Lemonade or State Farm, share your experience on Clearsurance to help better inform other insurance shoppers.

Interested in seeing what you'd pay for Lemonade renters insurance? Click the link below to get a Lemonade insurance quote.